The Prosocial Potential of Synthetic Media

​​Deepfakes are a terrifying development of our post-truth era. If we’re already in a dark place with misinformation, one can only imagine the darker turns things can take.

And yet..…what if deepfakes could be used in a radically different way? What if synthetic media enabled us to elicit the change we wish to see?

I’m an independent artist and the producer of Deep Reckonings, a series of explicitly-marked deepfake videos that imagine morally courageous versions of Mark Zuckerberg, Brett Kavanaugh, and other public figures. In this artist statement, I attempt to elaborate the potential of 'synthetic media for good' — or what I refer to as prosocial synthetic media — in order to better leverage synthetic media for socially beneficial purposes. I also explore the implications of synthetic media for our post-truth era, and open some philosophical doors into the nature of truth and reality. This statement is dedicated to the individuals and organizations working to alleviate the threats of synthetic media, and in particular: Henry Ajder, Aviv Ovadya, Sam Gregory at WITNESS, Shamir Allibhai of Amber, and Mike Pappas and Rupal Patel of the AITHOS Coalition. 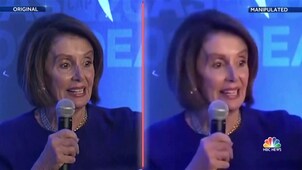 WHAT ARE DEEPFAKES AND HOW ARE THEY USED FOR GOOD AND ILL?

​AI-generated synthetic media are media that have been manipulated with artificial intelligence. Deepfakes are a type of synthetic media that have been manipulated with the AI technique of deep learning — hence the term is a combination of deep learning and fake. Shallowfakes and cheapfakes use basic editing techniques like changing speed or removing frames, whereas deepfakes use deep learning to generate entirely new visual content. An example of a shallowfake is the video of House Speaker Nancy Pelosi, which was slowed down to make her appear drunk; an example of a deepfake is Spectre's video of Facebook CEO Mark Zuckerberg, which was manipulated to make him give a sinister speech about his power. Although there's an inverse relationship between realism and accessibility, it's getting easier, cheaper, and faster to make it sound and look like people are saying and doing things they never said or did.

Deepfakes can be comical, like the sub-genre of swapping Nicholas Cage's face into movies he never acted in. They can also be used for commercial purposes, for example to dub movies more persuasively and make synthetic voices for video games. Most often they're nefarious, created to demean public figures and disinform viewers. According to a 2019 report by synthetic media tracking firm Sensity, a startling 96% of deepfakes online consist of involuntary pornography — which swaps people's faces into pornographic films they never acted in, usually that of a female entertainer like Scarlett Johansson or Daisy Ridley.

Amid the sea of nefarious deepfakery, there's a small but growing canon of prosocial synthetic media. A collaboration between the ALS Association and Canadian startup Lyrebird, Project Revoice creates personalized synthetic voices for ALS sufferers who've lost their ability to speak. MIT-based project In Event Of Moon Disaster features a fake Richard Nixon delivering the contingency speech he would have given if Apollo 11 had failed, and serves to warns viewers that synthetic media can be used not only to rewrite the present but also the past.

How might we conceptually organize this budding landscape of prosocial synthetic media? Given the extraordinary power of a medium that can make it look like anyone is saying or doing anything, where might we find untapped potential for using synthetic media in prosocial ways?
​

HOW MIGHT WE CATEGORIZE PROSOCIAL SYNTHETIC MEDIA?
​
As a starting point for exploring the prosocial potential of synthetic media, what does it mean to be prosocial?

As a baseline, prosocial synthetic media are produced responsibly. While there’s currently no formal alignment on what it means to produce synthetic media in a responsible way, but there are widely agreed-upon considerations that factor into the extent to which a synthetic media piece is considered responsibly-produced. Such factors include: 1) the piece’s potential for deception, which is a matter not just of intending to deceive but also of failing to sufficiently prevent deception; 2) whether a piece obtained consent from its protagonist, which isn't legally required (synthetic media fall under the categories of satire and commentary) but is still ethically meaningful; 3) the intent of the piece, which is subjective but also ethically meaningful; and 4) the piece's potential for normalizing problematic behavior, like non-consensual pornography. The relative 'weight' of these considerations also depends on whether a synthetic media piece is produced for public or private consumption, and commercial or non-commercial use.

I believe the most critical consideration in determining the extent to which a synthetic media piece is responsibly-produced is its potential for deception. I think the other considerations can be treated on more of a case-by-case basis. For example, I embrace the way human rights non-profit WITNESS approaches consent: public figures should have some baseline ownership of their likeness, but in general, the more public or powerful someone is, the less critical consent is. (For more on how to produce synthetic media responsibly, see the guidelines put forth by the AITHOS Coalition and Aviv Ovadya and Jess Whittlestone. For a discussion of how Deep Reckonings strove for responsibility, see the FAQ.)

Beyond being responsibly-produced, prosocial synthetic media fulfill a positive social purpose. Here, we’d want to distinguish between commercial and social utility. Again, there's no formal alignment on a distinction between commercial and social utility (and there’s meaningful overlap within the context of shared value), but for purposes of this discussion, we can loosely differentiate between synthetic media whose primary purpose is to serve commercial ends, like the dubbing of a blockbuster movie that serves the studio and consumers, versus social ends, like the dubbing of David Beckham's voice for a multi-lingual malaria PSA that benefits societies where malaria is endemic. 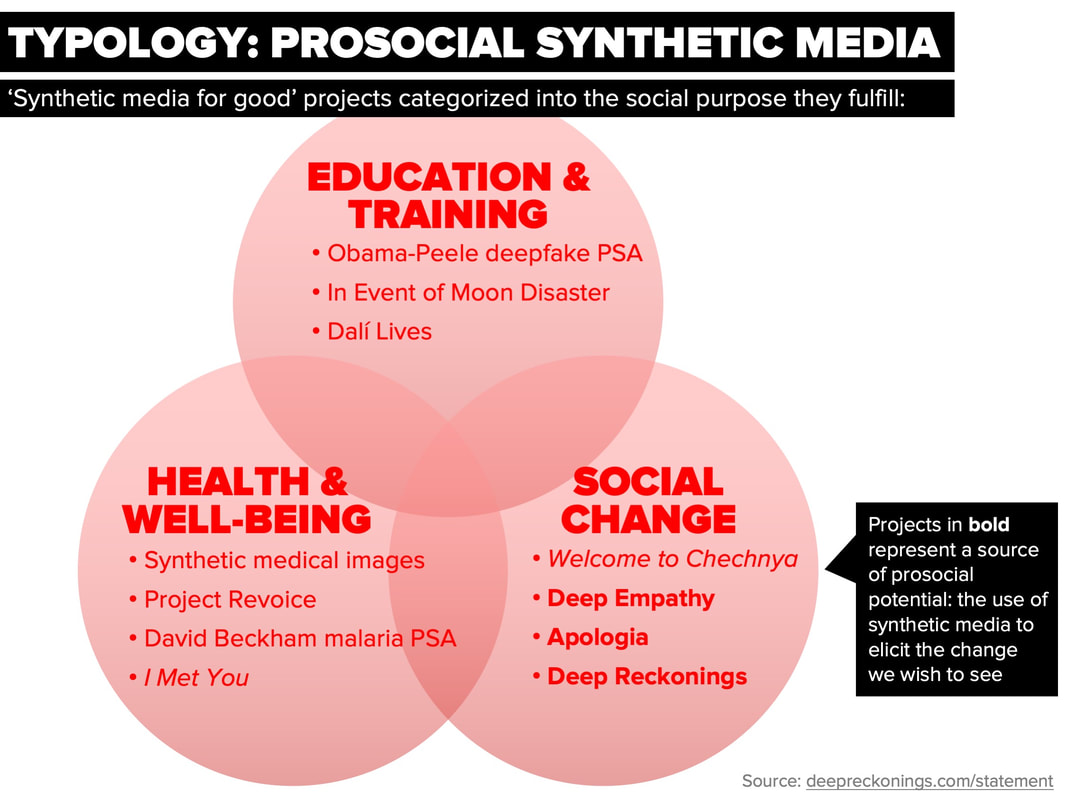 WHERE IS THERE POTENTIAL FOR PROSOCIAL SYNTHETIC MEDIA? HOW DOES THAT CONNECT WITH POST-TRUTH?
This capacity also leverages what I consider to be a superpower of synthetic media — that we can know they’re fake and they still affect us. We can know that a synthetic video of our future sober self is fake and still have it encourage us into recovery, or that a synthetic video of Brett Kavanaugh is fake and still have it move us to advocate for gender equality in a more compassionate way. We don’t have to sacrifice responsible production in order to leverage this source of prosocial potential: we make deepfakery explicit as part of envisioning more skilled, healed, courageous, and otherwise better versions of ourselves and our world. 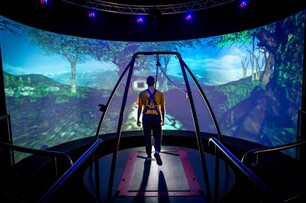 Ultimately, we create the stories that create us. We can create stories in ways that are mindless or nefarious, spinning hateful conspiracy theories that exacerbate public health crises or motivate mass shootings. We can also create stories mindfully and pro-socially: virtual reality therapy has been used to heal disorders ranging from PTSD to chronic pain, and psychodrama uses fantasy-based role-play to prepare participants for hypothetical future scenarios. It's said that the most underutilized tool in all of medicine is the placebo effect — the effect of believing we're being treated, irrespective of whether that's actually true. Speaking on Rebel Wisdom, psychiatrist and scholar Iain McGilchrist says "it's not that we create reality, and it's not that reality independently exists from us. We midwife reality into being" (emphasis added). By crafting stories that heal us, prepare us for the future, and otherwise materially affect our reality, we effectively co-create reality. And with synthetic media, we're gaining more power to co-create our reality. Instead of (or along with) being at the mercy of our stories, we're learning to craft synthetic narratives and experiences that 'midwife' our desired reality into being. Which is why the next step for Deep Reckonings is to make it real.

In this light, the implications of synthetic media for our post-truth crisis look different. On one hand, nefarious deepfakes threaten our ability to know what’s true and maintain a shared sense of reality. On the other hand, prosocial synthetic media can help us build a more purposeful relationship with truth and reality, which I'd humbly propose is necessary for transcending our post-truth crisis. Echoing Deep Reckonings' imaginary Alex Jones, "It's not about believing that everything is fake, or everything is real, or even somewhere in between. It's about believing what’s actually true, but not stopping there! We can't just ‘report the facts’ like the lamestream media. All journalism should report the facts — it's about: whose facts? Told how? For what purpose?" The question isn't just is this true? but also what purpose does this truth serve? And sometimes, a given purpose is best served by non-truth — not in the sense of lies, but in the sense of purposeful fictions that enable us to co-create our desired reality. This reframe can act as an antidote to the "liar's dividend" — the phenomenon whereby the more fake content there is, the more liars can call "fake news" on non-fake content. Armed with an understanding that truth can be partial and reality can be co-created, we're less vulnerable to the claim that something isn't the capital "T" Truth. ​
Returning to the point at hand: the notion that evolving our relationship with truth and reality is necessary for transcending our post-truth crisis is an enormous statement. If you're intrigued, watch this video essay and let's talk :) For now, I'll conclude with the bold suggestion that: while deceptive deepfakes exacerbate our post-truth crisis, prosocial synthetic media may actually help us transcend it — by enabling us to elicit the change we wish to see, and in turn, to create a more rightful place for purposeful fiction.

LET'S LEVERAGE THE POWER OF SYNTHETIC MEDIA FOR PROSOCIAL PURPOSES

Given the threats posed by synthetic media, is it ever worth releasing a deepfake into the wild? But it's neither that deepfakes are inherently good or bad (technological determinism), nor that they're neutral and entirely dependent on what we do with them (social determinism). As philosopher of technology Langdon Winner articulates, most technologies hold potential for good and harm, and therefore require thoughtful stewardship.

In his book The Road Home, Buddhist teacher Ethan Nichtern describes the meditative practice of visualization as creating a "mindfully creative space, a kind of movie studio that...benefits sentient beings." He notes that "all visualizations end by dissolving imagination and returning to naked awareness" because "the point of visualization is to return to the present moment more confidently, more empowered, and more available to others" (emphasis added). In a similar spirit, may we use prosocial synthetic media to create a kind of movie studio that benefits us. May we return from our synthetic experiences more confident, empowered, and available to contend with the reality of our lives. And may we be more deliberate and creative about the reality we co-create.